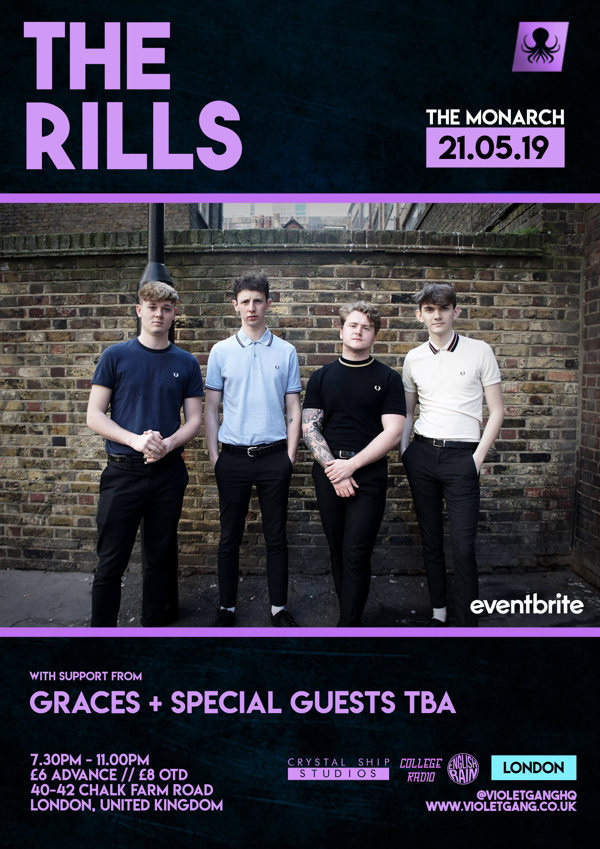 Violet Gang London presents The Rills with support from Graces and more TBA at The Monarch on Tuesday 21st May. £6 ADV // £8 OTD.

The Rills are a DIY indie/alternative band from Lincoln living in London, combining 80’s style guitars with a punk attitude.

Based on an endearment for neon teen cinema and a love of youthful exuberance, Graces combine ambient soundscapes, distorted guitars and recognisable pop sensibilities. The band spent their formative years in the rural Lake District before relocating to South Yorkshire two years ago.

Breaking out of the four walls of their post-industrial rehearsal space in Sheffield, the band have toured their live show around the country, playing packed-out venues in Sheffield, London, Manchester and almost everywhere in between. The melancholy prowess of the band embraces the volatility of growing up, finds the dirt and celebrates it.

Whilst sharing stages with Feeder, The Amazons, Black Honey, Fickle Friends and King No-One, the band have worked with producer Phil Gornell (Bring Me The Horizon, All Time Low, 5SOS) and were lauded by the mainstream music press. After a busy festival season which included performances at Tramlines, Kendal Calling and Y Not Festival, a new EP is set for release in 2019 with the band announcing their biggest ever headline shows.