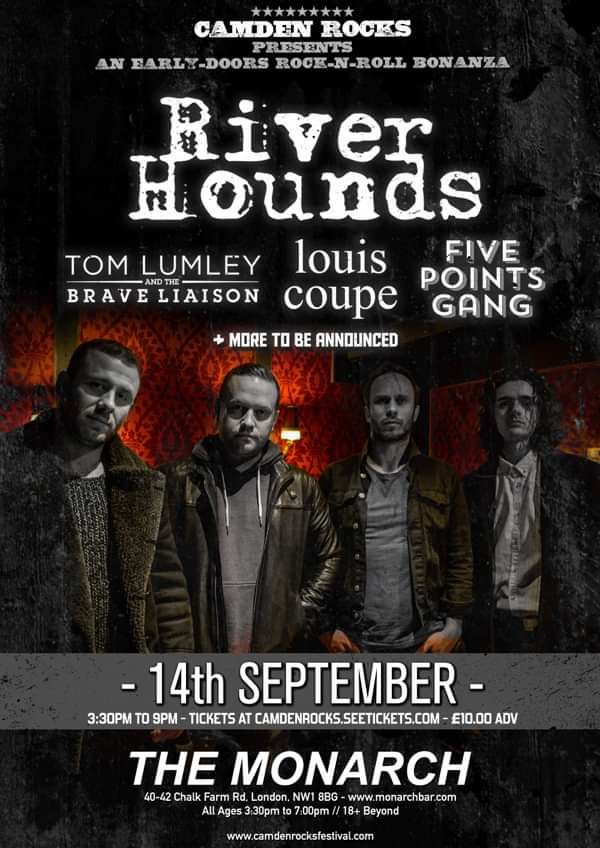 Tom Lumley & The Brave Liaison - https://youtu.be/D62WRNrxYxY Tom Lumley & The Brave Liaison are fast gaining themselves a reputation for being a “must see” band who are known for taking to the stage with monumental energy that’s felt from the front row to the back of the room. Having only been a band for 2 years, they’ve already supported some of the UK’s hottest acts, including The Hunna and Sam Fender. The band took to the stage in 2017 to play the very last Secret Garden Party for BBC Introducing, at the time having only been a band for a matter of months. As well as this, they’ve played stages at Bestival, Common People, Truck, Dot To Dot, Splendour and Green Meadows festivals.

Louis Coupe - https://youtu.be/_NRfLi21nXk From his beginnings as the outcast in the music class, Louis Coupe has forged his own path through a sheer passion for music. Raised on the Stones and the Beatles, Louis discovered his home playing in bands from the age of 16 and quickly found himself touring the UK, honing his craft anywhere that would take him – anything from clubs, boats, living rooms to arenas. Now 22, his extensive time earning his stripes out on the road, as well as a rebellious and maverick attitude to music keeps him grounded with a distinct disregard for any musical ‘rulebook’ – an ethos he stays firmly true to. Taking influence from a huge range of music from the lo-fi vibes of Bon Iver and Jeff Buckley, to the eclectic sounds and melodies akin to the likes of Bowie and The War on Drugs, Louis fashions together a diverse and experimental, yet classic sound, channelling all the egos and authenticity of his historical counterparts.

Five Points Gang - https://youtu.be/1Z2li6opF38 Five Points Gang is a London based blues trio. The band are Harry Michael, Dinho Barral and Joe Pearson. Harry, Dinho and Joe met toward the end of 2018. From their first free flowing jam in a Notting Hill rehearsal studio, they knew something special was happening, and right there and then, the band was born. Although the focus is blues, the guys quickly discovered that their varied styles and capabilities injected something new into the genre. Five Points Gang is unafraid of combining jazzy/fusion improvisation, with hard hitting blues rock grooves and catchy songwriting – somehow keeping true to the modern blues ethos which is the thread that links them together. No two gigs will ever be the same, and the audience is as much a part of the performance – and over all gig experience – as the band themselves..