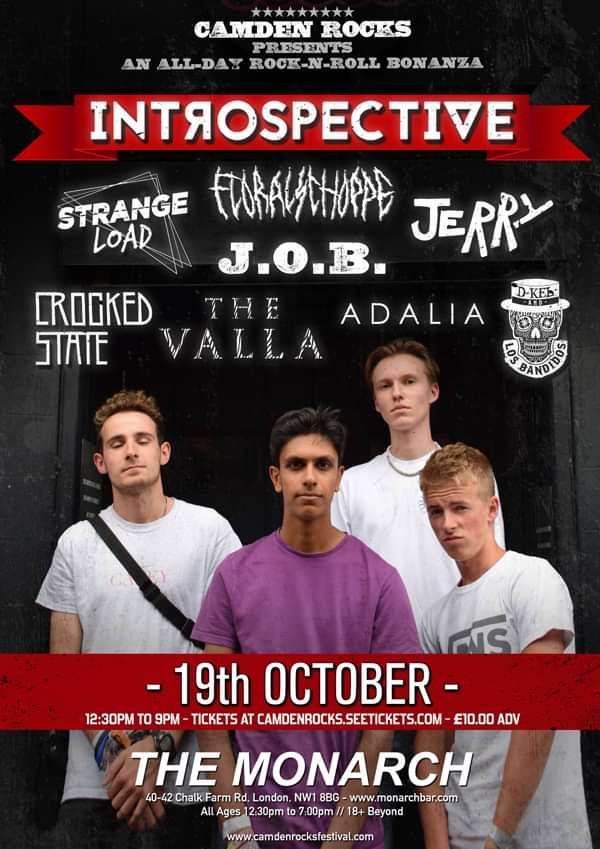 Introspective - https://youtu.be/HiG8EZOxZmE We are a London-based indie-rock band formed in 2019, all aged just 17. Our energetic sound centres around powerful riffs while drawing in elements of other genres such as metal and jazz.

Strangeload Band - www.facebook.com/strangeloadband Strangeload are a new 6 piece pop/rock band from London. A bunch of friends who missed playing music have brought their love for heavy riffs, solid drums, great bass lines, harmonies and a tight live performance together to play throughout London.

Floral Schoppe - https://youtu.be/BxM9p51u108 Floral Schoppe is a 5 - piece psychedelic rock band based in London. Their focus is to create sonically & visually stimulating live experiences. Inspiring you with weirdness you didn’t know you needed.

Jerry - www.facebook.com/jerryukband Jerry are a post-punk 4 piece from York/London. Their recent successes include winning the Green Man Rising competition and opening the Main Stage at the festival. The Guardian has described them as "vital and ecstatic". Their releases 'Late Hugh' and ‘Anxiety’ have been BBC introducing's 'Track of the Week' and has since been featured on their 'best of 2018' playlist, while 2019 saw the release of their debut EP ‘Ordinary Type’ which premiered on Peggy's World via Boogaloo Radio and received a 10/10 from Bucket List Music Reviews.

JOB Band - https://youtu.be/luqBmsdN4cg J.O.B, Jayden Fitzgibbon/ Oscar Ball/ Ben Hodgkinson, are an alternative rock trio from Essex who began playing together in early 2018. Many gigs later, the band released their debut single 'Waterfall' in July of that year. Both songs from the single, 'Waterfall' and 'Fake Smile'; went on to be aired on national radio station, Union Jack, where they were a regular feature on their Undiscovered Playlist. More recently in 2019, the band have been working towards the release of its debut album 'Free Your Mind', available on ITunes, Apple Music, Spotify, and all other social media platforms from the 8th September. We are really excited to showcase some of our new material at this amazing venue!

Crooked State - https://youtu.be/jJTmaSyyZM4 Crooked State is an London-based outfit with a prog/ punk sensibility, plus a stage show to match. Following newly released singles and a music video (banned from youtube), the subversive group melts faces all over the world and beyond.

The Valla - https://youtu.be/vyrjI-R1CrY Bohemian Indie Rock-band The Valla formed in 2018. Holding the line between Pop and rock, inspired by the likes of Cage the Elephant and Gang of Youths, they play what they describe as ‘music for damaged souls’ for those craving a deeper meaning in life.

D-Kel & Los Bandidos - https://youtu.be/SQdWYY1J6fA Distinctive South London rap artist D-Kel presents his new alternative, energetic and emotive new band ‘D-Kel & Los Bandidos’, a band full of versatility that could only be found in the melting pot that is London . The unique hybrid of Punk, Dub, Indie Rock and Rap combines perfectly to form an innovative, exciting, fresh new sound. The 4 met through their passion for similar music and their willingness to start a band with a DIY mentality, Punk attitude and with the vision of creating up-tempo ‘feel good’ music. The band have a feeling of something classic, somewhat vintage but yet refreshing and original, with a strong British representation featured throughout their music.

Floral Schoppe is a psychedelic rock band based in London.

Their focus is to create sonically and visually stimulating live experiences. They do this by writing music that juxtaposes heavy punk and rock influences with more mellow and delicate genres such as jazz and latin, often several times within a song. Additionally, they have put a great focus on our costumes during live performances, creating characterised alter egos for performance accompanied with distinct, colourful clothing and body paints.

They’ll put on a show that you will remember.

Inspiring you with weirdness, breaking the barrier between them and audience. 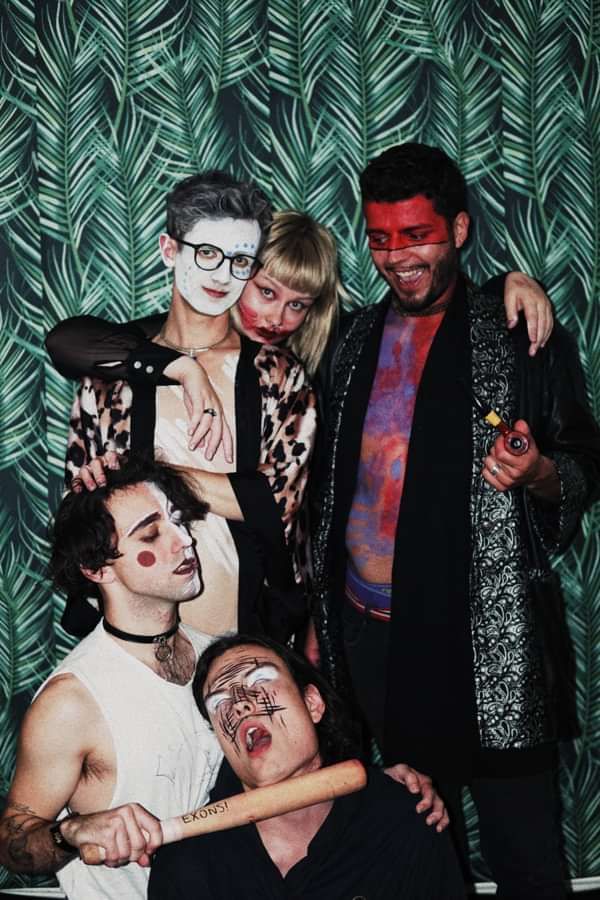 Bohemian Indie-Rock band The Valla formed in December 2018. Native of nowhere, the four-piece emanate from England, Wales, Australia, and Germany, but currently reside in London, UK. Holding the line between Pop and rock, inspired by the likes of Cage The Elephant, Gang of Youths, and Catfish and the Bottlemen, the band plays what they describe as ‘music for damaged souls’, writing with beautiful insecurity and vulnerability, appealing to anyone searching for a deeper meaning of life in the modern world.

The band released their debut single There For You in June 2019 with raging success, and followed with heartbreaker single Anymore, both of which are from their upcoming, highly anticipated EP. Both tracks have been produced by acclaimed London producer Andy Hall Hall who has worked with artists such as Bastille, Rag'n'Bone Man and The Wombats. After its release, There For You was featured as ‘track of the day' on ‘Rock n’roll and other sounds’ and the ‘find a song blog’, and went on to strike a chord with The Valla’s growing fanbase, sparking a wide range of online acoustic covers of the song. Having begun their career by performing a number of gigs and house concerts to build a small devoted fanbase, The Valla has recently headlined big venues such as Tooting Tram and Social in London, and have a number of gigs lined up over the next few months to promote their upcoming EP release 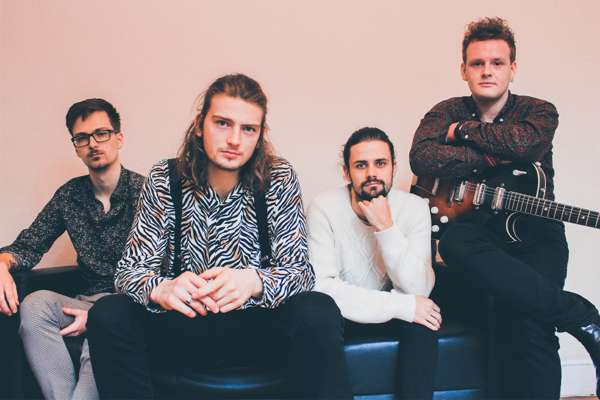 “I didn’t set out to make a song which follows a certain formula, I’m becoming more open and experimental with my music which I believe has a positive impact on the quality, some people might call it indie-rap or Ska-Hop, to me its just music influenced by what I like”

The EP certainly does have a feeling of something classic, somewhat vintage but yet refreshing and original, an strong British representation is featured throughout the EP, whilst the EP is varied, there is a consistent sound flowing throughout the tracks which have been carefully produced by D-Kel’s long term producer team ‘Insynthesia’ 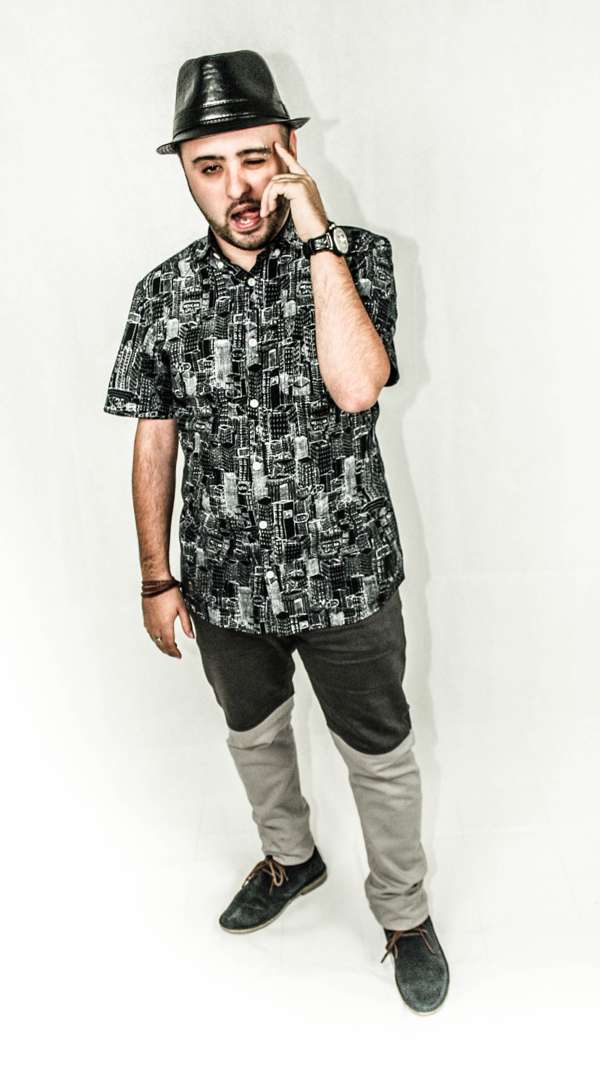