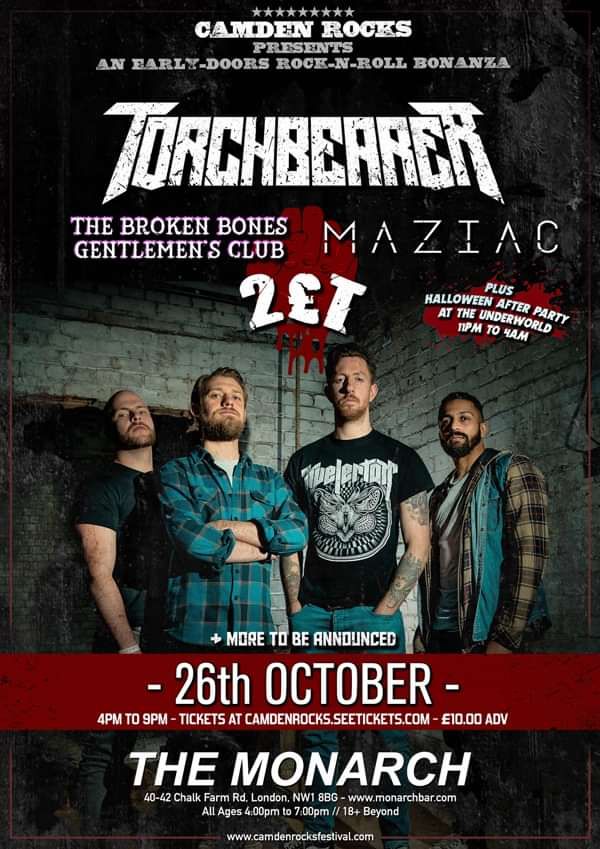 Torchbearer - https://youtu.be/pbVmPHYK7BY Born out of the fertile rock band breeding ground that is South Wales, Torchbearer is ex members of Collapse (Transcend Music) and Blowgoat (Saviour Management). The reason we're alive is to connect with as many people around the world as possible through our music. We don't impersonate Arnold Schwarzenegger and we don’t wear gimp masks. Our intention is to separate ourselves through the most mouthwatering riffs and seething vocals balanced with beautiful melodies and thunderous bass alongside a frenzy of drums. No guy-liner. No gimmicks. Against The Tide EP out now on all platforms.

The Broken Bones Gentlemen's Club - https://youtu.be/QNy70nmASGk Bristol hardcore punk band, formed in 2014, but no one cares.

MAZIAC - https://youtu.be/mxd5IVzqR9s Maziac is a progressive metal/alternative rock 3-piece based in London. Their eclectic debut album 'Forged', mixed and mastered by former SikTh vocalist Justin Hill, has been described as 'eight tracks of musical magic' (Über Röck) which 'blend and contort what you think you know about metal genres' (Rock 'N' Load) with 'pacing and dynamics which have been perfected' (3 Songs & Out) into 'one of the year's finest moments' (The RingMaster Review). Maziac are currently bringing their immersive album to life with live shows across the country whilst working on new material behind the scenes.

2£T - https://youtu.be/htqBuSFU2kM We are a 4 piece punk rock band from London called Two Pound Tea. We are fed up with Trump, brexit, abuse of minorities and those deemed different. Our songs are high energy punk with political lyrics. We are twenty somethings who want to speak to our disaffected generation. We always bring a a high octane high energy show and we aren't afraid to speak our minds.